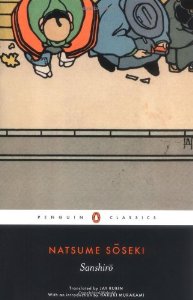 There are going to be a few thematic spoilers to this book, but I'll be careful not to spoil too much for those who want to read Sanshirō.

"He drifted off, and when he opened his eyes the woman was still there."

Despite its simple appearance, this is a really great first line. Even without being informed by the rest of the novel, we can learn a lot about Sanshirō as a character from this opener. If we build the imagery of what is happening here in our minds, we see that Sanshirō took enough interest in the woman nearby to notice her, but allowed himself to drift off to sleep. When he does awake from his brief rest, he immediately notices the woman again.

What does this mean? Clearly women are something of interest to Sanshirō, evident by the fact that nothing else about his surroundings is mentioned as he falls asleep, or as he wakes up. And yet, there is something about the choice of the word “still” that implies Sanshirō is not entirely comfortable with the woman nearby. As though by closing his eyes and drifting off to sleep Sanshirō hoped the woman would be gone by the time he woke up.

This, as we will see throughout the rest of the book, is a perfect representation of Sanshirō’s relationship with women. They are interesting and alluring, full of mystery and worthy of attention. However, these same qualities fill Sanshirō with uncertainty, confusion, and even fear at times. You can see throughout the book moments when he wants to close his eyes with the hope that, when he opens them again, things will be more calm, more like the rural world he grew up in.

Sōseki does a great job with this first line, filling it with all the tension that Sanshirō will face throughout the rest of the book (both from women and more generally from his transition to Tokyo). Most of this wasn’t evident to me when I initially started the book, at least not consciously, but even without knowledge of the events to come, I think this opener does a great job in setting the tone and giving some insight into Sanshirō from the outset.

I found you through your link on the goodreads competition. This is a great site, Scott. And the some smart, some don’t title is hilarious. I’ll keep my eye on you…

Thanks for stopping by! I’m glad to hear you enjoy the site so far, hopefully you continue to enjoy it in the future as well!

Why did you stop writing your reviews? I enjoyed them and share similar tastes in literature as well. I understand it is a commitment.

Hi Louis! Thanks for the encouragement to keep posting. I feel terrible for being so far behind, but I’ve been reading and making entries in my database so I do have books to talk about. I’ll do my best to get some reviews out there soon. Thanks again for the note!