The Moon is a Harsh Mistress 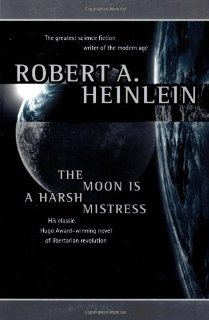 I read Robert Heinlein's Stranger in a Strange Land last year and I didn't enjoy it, despite its strong start. In addition to my disappointment over the book, I was also surprised by the fact that I didn't like it. Here we had what is considered one of the greatest science fiction books of all time, and all I can do is criticize it for being heavy-handed and dull. Shouldn't this be exactly the kind of thing I love to read?

Since my experience with Stranger last year, I really had no intention of reading anything else by Heinlein. Still, he is considered a master in the genre and there were definitely some promising aspects to Stranger. And if C.S. Lewis is right when he says you can't criticize a book the first time to read it (shh...don't tell him I do that every time), I certainly don't have the right to ignore everything else by Heinlein just because of one reading of one book.

And a good thing I didn’t give up on him, because everything Stranger gets wrong, The Moon is A Harsh Mistress gets right. Mistress tells the story of Mannie, a computer technician who becomes involved in a rebellion whose goal is to free the residents of the Moon from the tyrannical control of the Authority. Heinlein does a great job of introducing the conflict to us, and sets up a scenario in which there is tension about the ultimate success of the rebellion. While this aspect of the book is good, it's certainly not what really makes it shine.

What does make The Moon is a Harsh Mistress a great book to read is the depth to which Heinlein goes to create a world in which people don’t just visit the moon, but actually live on the moon. Through the process of exposing how Mannie and his friends coordinate their rebellion, Heinlein subtly and thoroughly shows us what it’s like to work, play, marry, love, hate, eat, drink, and make war on the moon. What makes this all great, though, is how his strategy to reveal all this differs from Stranger. Instead of telling us what it’s like to live on the moon, Heinlein shows us, in the small moments between the larger scale of rebellion against earth. It’s subtle, but wonderfully executed, and makes the book a real pleasure to read.

If you've ever wondered what it’s like to live on the moon, with a 3:1 male to female population, while attempting to rebel against a heartless Terran government (and really, who hasn’t?) then The Moon is a Harsh Mistress is definitely for you. If, somehow, you haven’t wondered that, I still recommend the book if you enjoy an author who uses great characters and an interesting plot to help us earthworms consider the nuances of something as foreign as Lunar life.

Nothing wrong with your television set. STRANGER is much beloved mostly by people who haven't read it...it's not quite the first Heinlein novel to go off the rails into self-indulgence, but it shows the bad trends very much in progress, while MISTRESS is probably the best novel of his career (and surrounded by most of the worst--not least FARNHAM'S FREEHOLD and I WILL FEAR NO EVIL, though most readers seem particularly upset with the rather later THE NUMBER OF THE BEAST--FRIDAY and JOB are rather better latest works, but they're no TMIAHM).