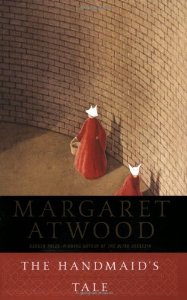 As a matter of fact, one of my favorite aspects of this book is how it captures both the bad qualities of the society before the new "Handmaid" regime is put in place, as well as the "Handmaid" regime itself. It would probably have been easier just to cast the latter regime in an evil light, but I appreciate that Atwood was willing to criticize the extremes of the pre-dystopian society as well.

I definitely recommend The Handmaid's Tale, especially to anyone interested in dystopian literature.  However, considering how well-crafted the book is, I don't think you have to be a fan of similar books to enjoy this book.

"Truly amazing, what people can get used to, as long as there are a few compensations" (270).

I love <i>A Handmaid's Tale</i>. One thing of my favorite aspects of the book was how unexpected little nuances were. (...not sure if these are spoilers, so viewer beware...)

For example, the 'Handmaid' society seems to have generated from either the cultures of the US and/or Canada. I assumed that whatever caused this semi-Taliban society to arise, occurred all over the world and not just in North America. However, I was shocked when people from an Asian culture visited the Handmaid society and not only were they more sexually liberated than the Handmaid society, but they were also depicted as more sexually liberated and free than their modern day counterpart. Such events as this caused me to reexamine certain assumptions about the longevity of a culture typically portrayed as surviving where others will not. It was refreshing in many ways and, for me, believeable but strange.

I was quite surprised by that moment too. It was almost hard to believe that the Handmaid regime was only a small part of the whole outside world. I guess that speaks well of Atwood's ability to engross us as readers.

I also thought it was interesting how, in the "Historical Notes" it is the mid-22nd century. If we assume the majority of the novel took place just after modern times, the Gilead regime could have lasted nearly 200 years, or practically as long as our current government. This definitely caused me to reexamine the longevity of our culture and government!