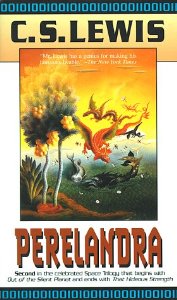 Instead of listening to audio books during my daily commute, I have recently been enjoying lectures from The Great Courses.  These cover all types of subjects, from classical mythology, to Einstein's theory of relativity.  The one I just finished, however, was a 12 lecture series on the life and writings of C.S. Lewis.  I complimented this listening experience by reading Perelandra, the second book in Lewis's classic Space Trilogy.

I've read Perelandra before, as well as a number of Lewis's other works, but by listening to lectures discussing major themes of his work in general, while simultaneously reading a single work in depth, I was able to enjoy it at a much deeper level.  I encourage anyone with the time or opportunity to do something similar.

As for the book itself, Perelandra follows Ransom (a professor of philology) on another interstellar adventure - this time to Venus (or Perelandra).  While there, he becomes involved in Perelandra's own Edenic struggle to resist temptation.

I loved reading Perelandra. Lewis's ability to make the temptation believable, and compelling, is extremely impressive.  In fact, the dialogue of this book is far more exciting than the "action" moments.   Full of fascinating ideas, Perelandra is easy for me to recommend - to a certain audience.  I can see how many, however, might not enjoy it nearly as much as I have.

First of all, science fiction fans who aren't interested in Lewis's Christian theology would find this book endlessly frustrating.  Lewis makes no attempt to hide the Christian elements of this work, and I can see how someone who is not predisposed to believe the same things as Lewis would criticize this as being preachy or even condescending.

On the other hand, those who may hold the same beliefs as Lewis may not be as interested in a book that is so very science fiction.  In fact, the sci-fi qualities are even more obvious than the Christian elements to the story, making a predisposition for enjoying this kind of work even more necessary.  However if, like me, you are interested in rigorous theology in your hardcore science fiction, then this is definitely the book for you.  That has to be one of the nerdiest things I've ever said.

I just finished reading this book earlier in the week. I'm liking Lewis' Space Trilogy so far; very compelling ideas considering space wasn't explored yet in Lewis' time. Outside of the story slowing down for me in the last chapter, I enjoyed the book overall.
Lewis wrote an essay once on whether extraterrestial life would be subject to the same need for reconciliation as mankind, and I'm curious now whether the trilogy or the essay came first.

Interesting, I'll have to check if the collection of essays I have by Lewis (<i>Of Other Worlds</i>) has that in it.

If you haven't yet, I encourage you to take a look at the database entry on this one - I tried to use quotes from <i>Perelandra</i> to exemplify some of the ideas common to Lewis's writing in general (based on what I learned listening to the lectures). You may find it interesting.

I'll warn you, as well, that the third book in the trilogy is very different. It starts of slow and takes a long time to get going. It's been years since I read it, but I do remember ultimately enjoying it. It just took a while to get there.

Good database notes -- this book was an intriguing case study on temptation. Much talk was made about how the world of Perelandra was new, but I wonder what was up with the mermaids and other underwater creatures; did they play any role in the past? This seemed to be the first real bout with temptation that Perelandra had faced.
I did like Ransom's thoughts on goodness; they reminded me of how Lewis described Aslan, saying that he wasn't safe, but he was good.
I've read a fair amount of Lewis' non-fiction, but I'm finally getting around to this Space Trilogy. Thanks for the heads up about the slow start to the third book.

Thanks! That's an interesting observation with the mermaids. I wonder if they were like some of the other creatures on Malacandra and not hnau, or sentient, beings?

I never made the connection between Ransom's thoughts on goodness and Aslan, but I agree!

One of my favorite things about Lewis is his versatility. One day you can be reading <i>A Preface to Paradise Lost</i> and the next day <i>The Chronicles of Narnia</i>.