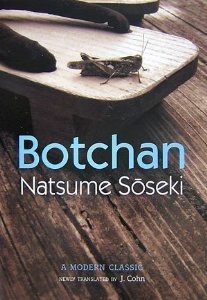 On the other hand, sometimes introductions go a little overboard.  My favorite book to recommend, I Am a Cat is a perfect example.  At first the introduction seems to just offer clarification on translation issues but suddenly it gives away the ending of the book, and offers an explanation for why it happened.  Why do this?  Why ruin an emotionally powerful moment of the book in the introduction without warning?  Does the translator assume only those who have read the book already will peruse the intro?

These days, I avoid introductions whenever possible, and in the case of a translated book, I read it (literally) out of the corner of my eye so I can turn away before anything gets spoiled.  Well, with my rant out of the way, let's move on to Botchan proper.

Botchan is the tale of a young man who moves to rural Japan to become a teacher.  He encounters a wide array of characters, all of whom he brings to life through bizarre nicknames and colorful commentary.  Of all the characters, however, Botchan is by far the most interesting.  His unwavering commitment to honesty and upright behavior is both commendable and hilarious.  His discussions of those around him are unrestrained and riddled with sarcasm.  It is not a stretch to compare his accusations of weakness to Holden Caulfield's outcries of "phoniness".

I found Botchan to be funny and engaging.  The translation is excellent, and the work did not feel foreign or unapproachable.  Far from it.  In fact, I would recommend this book to anyone who enjoys fiction, but those who have a special place in their book-loving souls for The Catcher in the Rye will find it particularly enjoyable.

"Now that I thought about it, though, I realized that most people actually encourage you to turn bad. They seem to think that if you don’t you’ll never get anywhere in the world. And then on those rare occasions when they encounter somebody who’s honest and pure-hearted, they look down on him and say he’s nothing but a kid, a Botchan. If that’s the way it is, it would be better if they didn’t have those ethics classes in elementary school and middle school where the teacher is always telling you to be honest and not to lie. The schools might as well just go ahead and teach you how to tell lies, how to mistrust everybody, and how to take advantage of people. Wouldn’t their students, and the world at large, be better off that way?" (72).

(Also, how did you feel yesterday when you heard the news of Salinger? )

Sad, nostalgic, and I immediately wanted to read <i>Catcher</i> again. It was weird, too, because I was thinking about him and <i>Catcher</i> so much already while reading this book. You?

The same - sad and nostalgic and a little bit excited that we might get to read some new stuff (although, I'm kind of afraid it's bad). This is the first time in three years that I'm not teaching Catcher right now, and that makes me sad. I would love so much to interact with kids who are discovering and connecting with Holden for the first time right now.

New stuff would be great but it is hard to envision how it could live up to <i>Catcher</i>. Is there officially word on if he was writing, or are we just assuming he was (a completely reasonable assumption, in my opinion)?