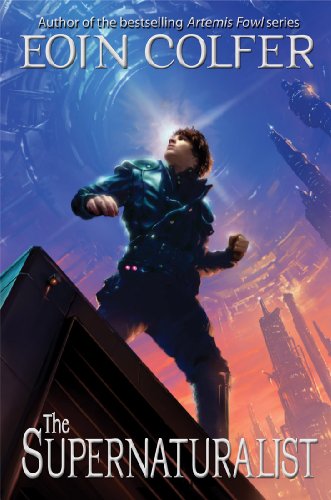 SATELLITE CITY: THE CITY Of the FUTURE, proclaimed the billboards.

A straightforward first line, but also one that contains some insights into what we can expect from The Supernaturalist. First of all, we immediately learn where the story will take place - Satellite City. From this it's safe to assume that this will be a science fiction novel that takes place in space, or something like space. Both perhaps obvious from the back cover, but if you are like me and don't read such things, it's good to know what you are getting into from the beginning. This is especially true with a title that may imply a plot that is more about ghosts than aliens.

Finally, I can't help but notice that the first line here doesn't mention any characters. I don't take this to mean that characters aren't, or won't, be important in the novel. However, I do think it emphasizes the importance that the setting will have on the novel that we are about to read.

The Supernaturalist may not have the most dynamic or dramatic first line, but it is a solid one that can give some worthwhile insight into the novel it kicks off.