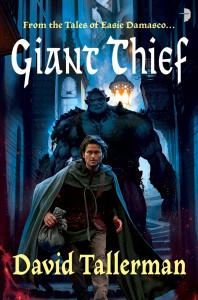 Note: An electronic copy of Giant Thief was provided to me for review by the publisher Angry Robot Books.

Easie Damasco is a scoundrel and an thief, and everyone seems to want him dead. Despite near constant threats to his life, nothing deters him from continuing his life of crime at every possible moment. As a result, Giant Thief is a fast-paced, non-stop action fantasy novel full of comedy that never lets up from beginning to end.

From the first line, we learn a lot of what we can expect from Giant Thief: “The sun was going down by the time they decided to hang me.” This is a great opener – we immediately learn that Easie is the type to look at even the most serious situations in a carefree manner. Also, we see that he’s the type of guy who puts himself in a position where people want him dead. Unfortunately, this quick-draw opening and the subsequent chase actually left me a little bewildered. Who is Easie? Why should I care whether or not he is captured and killed? Even by the end I felt like I had only scratched the surface of understanding Easie as a character.

I had a similar problem with the main villain, Moaradrid. Easie continually referenced the warlord’s evil nature, and was obviously scared of him, but I never felt that fear as a reader. Maybe it was a result of not connecting strongly with Easie, or a lack of information on who Moaradrid was, but I felt more like I was being told the bad guy was bad, rather than seeing it for myself.

In a recent interview Tallerman mentions that he “stripped out more and more of his dialogue with each redraft”, which makes me wonder if perhaps the novel would have worked better had some of this dialogue been left in. I can see the purpose of stripping out “justifications” from the villain, but at the same time if it leaves me questioning the depth of his insanity, the villain becomes neutered.

While it leaves a little to be desired, if you are looking for a funny, fast-paced fantasy adventure that doesn’t rely on cheap magic tricks to get out of every sticky situation, give Giant Thief a shot. Plus Easie is totally a medieval Han Solo, and how often can you say that?

"that doesn’t rely on cheap magic tricks to get out of every sticky situation" I like the sound of that. I'm currently getting through David Eddings books, but the number of times something interesting is solved too soon by magic...

Good review. Is this the first in a series? (In which case maybe character description will improve later on).

Yeah there's actually zero magic at all. I kept expecting it, and it wasn't until afterwards that I realized it was completely absent. It is the first of the series, and from what I read in the interview it sounds like the sequels will be coming pretty soon.

I really do hope the sequels have a little more depth, because the idea of comedy fantasy is great, and Tallerman clearly has a good sense of humor and timing. I think if you are aware of the flaws going into it, though, it can be a fun "snack" between more serious books.