The Book of Three (Audio) 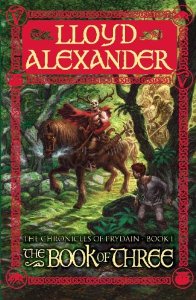 I can't exactly remember who or what referred me to The Book of Three.  All I know is a few weeks ago I received a "the book you placed on hold is now available" email from the library and so I went and picked it up.

The Book of Three tells the story of a young assistant pig-keeper named Taran who lives in a mythical realm known as Prydain.  If you have seen the movie "The Black Cauldron" you have seen a movie loosely based on this book.  (Interesting note - the second book in this trilogy is actually called The Black Cauldron, but the movie of the same title is based on the first book.  Go figure).  Anyways, Taran has to recover his lost pig, but ends up having a grand adventure along the way.

The story is your classic hero quest, but what makes this book so good is the plethora of interesting characters.  From the sassy and hilarious Eilonwy, to the pathological liar/bard/king Fflewddur Fflam, The Book of Three is absolutely bursting with entertainment.  By the end, the story was just a means for placing these great characters into situations in which they could interact with each other.  That isn't to say the story was boring, but the dialogue was by far the star of the show.

I highly recommend this (the narrator is excellent on the audio book, but I'm sure actually reading it would be just as good) to anyone who enjoys lighthearted fantasy.  Personally, I can't wait to read the next book in the series if for no other reason than to see what everyone is up to next.

Hey -- I remember these books! I haven't read these since I was a kid, so I'd like to go back and see how much they remind me of Wales now that I've been there. I watched The Black Cauldron after I read this series, and I believe they patched together parts from the first couple of books (I don't think the witches were in the first book). I can't believe how long it took Disney to put the movie out onto VHS/DVD, since I didn't go see it when it was in theaters. Glad you liked the book!

That's right, the author mentions in the introduction that Prydain is, more or less, based on Wales. I'm curious how much that comes through if you are actually familiar with Wales (which I am not).

I'm listening to the second now. I think once I've finished all three I'll try and watch the movie.

Actually, this is a series of five books, so you'll have a few more to listen to. But I think the movie is only based on the first couple of books, so you can probably see it soon. Incidentally, I think a new extended or remastered version of it is supposed to be released in stores this summer.

I hope they are doing a re-release on the movie. I tried to add it to my Netflix queue, but it was listed as currently unavailable.